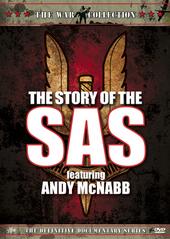 This documentary is made up of two parts. The first part is basically a history lesson of what happened during World War 2. The second part is all about infantry training that is conducted by the British Army.

This DVD has very little to do with the SAS. The only exception being the rather long and boring interview with Andy McNab. His interview isn't half as exciting as the events he wrote about in Brave Two Zero.

"We are the pilgrims o'master. We shall go always a little further.beyond that last mountain barred with snow, across that wild and stormy sea

This line is from a poem favoured by the SAS who are always prepared to "go a little further".

Story of the SAS captures the essence of British Special Forces from their conception in the Western Desert during the Second World War to the covert warfare of today. It also looks in depth at the tactics; esprit de corps and hard training that have made the SAS the most feared and admired troops in the world.

The programme looks at how the role of Special Forces has changed since the end of the Cold War including recent deployments to Africa, Asia and the Balkans. From sniping to the urban battleground, we see and hear the experts describe the art of modern warfare.

For the first time, cameras have been allowed into the famed British Jungle training centre in Brunei to follow soldiers through the elite tracking course.