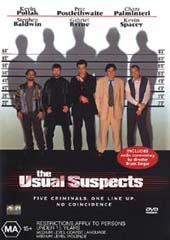 If you liked Reservoir Dogs or if your looking for a crime/mystery/drama film that will truly satisfy this is a must see. With a dynamic cast and story line, you will be on the edge of your seat with anticipation until all is revealed at the very end.

I think i would be safe to say that this film is a classic which is still at the top in its genre even after 15 years.

Held in an L.A. interrogation room, Verbal Kint (Spacey) attempts to convince the feds that a mythic crime lord not only exists, but was also responsible for drawing him and his four partners into a multi-million dollar heist that ended with an explosion in San Pedro Harbor – leaving few survivors. But as Kint lures his interrogators into the incredible story of this crime lords almost supernatural prowess, so too will you be mesmerized by a lore that is completely captivating from beginning to end!