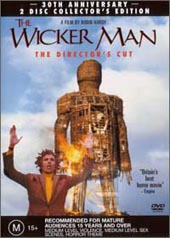 When a young girl mysteriously disappears, Police Sergeant Howie (Edward Woodward) travels to a remote island to investigate. But this pastoral community, led by the strange Lord Summerisle (a brilliant performance by the legendary Christopher Lee), is not what it seems as the devout Christian detective soon uncovers a secret society of wanton lust and pagan blasphemy.

Can Howie now stop the cult's ultimate sacrifice before he himself comes face to face with the horror of The Wicker Man- Packaged as a double DVD digi-pack, this set includes the original theatrical version of The Wicker Man and the recently restored director's cut which re-instates 15 minutes of rarely seen footage.

This special edition release provides film fans with the definitive DVD version of one of the most unique films of all time and gives you the chance to compare both versions of this seminal horror classic.