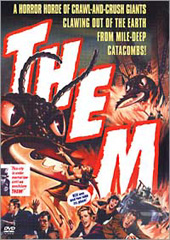 Them! is a landmark movie about giant radiation-mutated ants that gets better with age. It begins in New Mexico with a child wandering in shock, a ransacked general store-and a battered corpse full of enough formic acid to kill 20 men.

It ends with an epic struggle in the 700 miles of storm drains under Los Angeles, where the insect hordes are beaten. But they're not conquered, because they spawned a generation of films about radioactive creatures!