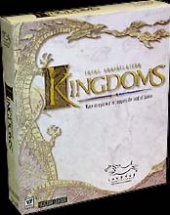 Unavailable
Sorry, this product is not currently available to order
Four Kingdoms, four creeds. Four immortal siblings locked for centuries in a battle to rule the land of Darien. Massive armies clash. Forests and cities burn. You must build your armies, hone your magical skills and wage war on an epic field of battle. Massive armies will clash. Forests and cities will burn. Tremendous magical forces will level entire fortresses in the blink of an eye. Four completely unique races are vying for control of the mythical world of Darien. As the immortal monarch of one of these races, you will call your legions to arms, bend magic to your will and wage war on an epic field of battle. Stunning 3-D terrain filled with hills, forests, magic-laden ancient ruins and expansive oceans provide a landscape of war fraught with ambient life, danger, magic and ambush.
Features: