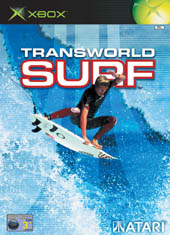 Unavailable
Sorry, this product is not currently available to order
Throw airs and turns off the wave while doing it in style. TransWorld Surf is an authentic surfing game featuring the most realistic 3D wave ever! Surf as one of 13 pros like Taj Burrows in a variety of world-renowned surf locations such as Pipeline and Teahupoo.

Players can compete in single-player career mode to complete goals based on surf breaks to attain the number one ranking in the competition circuit. Surf in multi-player modes such as "King of the Wave", get on the cover of the TransWorld Surf magazine, and avoid the sharks by keeping your "karma" meter high.

* Pull off insane tricks off the most realistic, randomly-generated 3D wave ever!

* The Karma Meter allows the player to interact with different objects and people to change the game play experience to suit their style. Keep the meter high by avoiding other surfers and dolphins. If your karma is bad, then the surfers and sharks may attack you!

* Interact with many different environments, objects, animals including other surfers/bodyboarders, sharks, dolphins, wave runners, boats, coral etc.) Get eaten by a shark or let the Reef girl tow you out to the gnarliest wave!

* Six game play modes including single-player Prosurf, Freesurf, and Single Session modes, as well as multi-player Freesurf, Competition and King of the Wave modes. In Prosurf mode, pull off a trick in front of the cameramen for potential magazine opportunities to unlock new breaks and levels!

* Sick pumping soundtrack featuring both licensed and original music and an audio ripping function allows you to record your own CDs onto the Xbox hardware.

* Special user-controlled camera views during replay and above and under-water viewing makes the game play even more realistic.