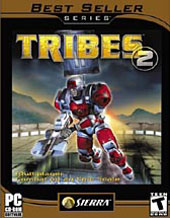 Unavailable
Sorry, this product is not currently available to order
The most innovative first person action franchise takes team-based warfare to new heights. Welcome to Tribes 2, where only superior teamwork and cunning tactics will ensure your Tribe's survival. With unprecedented innovations to team-based play and in-game communications, massive multiplayer support (50+ players) and new vehicles and weapons, Tribes 2 is the ultimate team-based action experience.

Cunning tactics and exceptional teamwork are the keys to victory in Tribes 2, the next addition to the Tribes universe. Compete online via the Internet or over a Loca Area Network (LAN) in challenging levels where players compete in squads to achieve the ultimate goal - victory. Fight alongside human teammates or fill out your team with computer controlled "BOTs". Either way, the fight of your life awaits you.