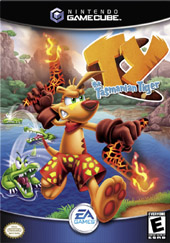 Due to COVID-19, we're unable to accept new orders at this time. Learn more...
Ty, raised by a pack of Bilbies, has only vague memories of his family and friends and believes that he is the lone remaining Tasmanian Tiger. During a chance meeting with a mystical elder, Ty discovers that his fellow Tasmanian Tigers are still alive but trapped in another world -- Dreamtime.

Ty must find five stolen talismans that will unlock and open the Dreamtime portal that is located deep within the Australian Outback. If successful, Ty will be able to free his family and reunite with them. So begins Ty's adventurous journey where he traverses through a wide range of locations including the rainforest, snowy mountains, dessert terrain and a barrier reef. Along the way, he will encounter a large cast of characters -- both friends and foes -- all of which are based on real-life animals that are indigenous to the Australian Outback. For example, the lovable Ty is inspired by the extinct Tasmanian Tiger and the evil Boss Cass --who along with his minions presents obstacles that Ty must overcome -- resembles an ostrich.

The game will offer many elements unique to character-based action titles, including Ty's usage of signature boomerangs as well as his mouth "chomping" abilities. More over, the game will provide a wide selection of gameplay styles like combat, riding, puzzles and an array of "mini games".