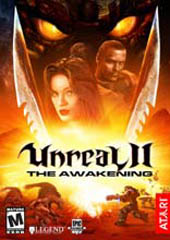 Unavailable
Sorry, this product is not currently available to order
The return of the legend! Unreal II is the next step in the evolution of the Unreal series on PC. A story-driven epic, Unreal II uses advanced new technology to combine the magic of Unreal's single-player game experience with the fast-paced multiplayer mayhem of Unreal Tournament. The result is a next-gen game that offers an intense and compelling playing experience.

Developed by Infogrames’ Legend Entertainment, Unreal II: The Awakening uses next-generation Unreal technology created by the masterminds at Epic to deliver intense life-or-death action in the most breathtaking scenery and environments ever displayed in a computer game.

In the game, players jump into the scarred combat boots of a grizzled lawman of the future, dispatched to more than 10 unique worlds to battle a torrent of bizarre alien creatures and hard-hitting enemy soldiers to stop an malevolent plot to awaken an ancient power. Between missions, players return to an orbiting ship where they can interact with their crew members, research items acquired during missions and refresh their arsenal. Designed to challenge both the hardcore ‘fragger’ and welcome the first time FPSer, Unreal II: The Awakening can be played fast and furious by the adrenaline junky or more slowly to ease newer players into the fray.