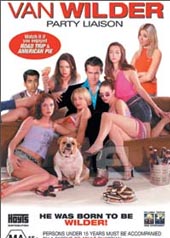 That’s Van Wilder’s motto and that’s exactly what he’s been doing for the last seven years. But when his father decides to freeze the funding that’s allowed him to stay in college and be the ultimate party animal, Van needs to come up with a new plan or his wild days are over.

RYAN REYNOLDS plays the legendary Van Wilder and he’s joined by TARA REID (from AMERICAN PIE) and TIM MATHESON (from TV’s THE WEST WING) in this raunchy new comedy proves that proves, when it comes to the loudest laughs and most outrageous scenes since AMERICAN PIE, Van’s the man!