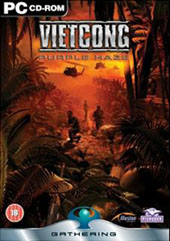 Due to COVID-19, we're unable to accept new orders at this time. Learn more...
Purple Haze offers a compilation of the original Vietcong, alongside the new expansion pack, Fist Alpha. Vietcong You forge ahead through the thick, oppressive heat. Your erratic heartbeat and amplified breaths are all that escape the hostile stillness. Sweat beads down your face as an all too familiar vibration breaks your concentration. You turn to face the threat while the rookie lays down a wild burst of gunfire into the trees up ahead. The jungle explodes into a fiery deathtrap with roars from automatic weapons interrupting the incoherent shouts from your men. Spin, aim, shoot, duck, dodge, fire. Your actions form a dance as rapid explosions create a giant fireball of destruction. And then, as quickly as the chaos sprang to life, it departs, slipping away into the darkness. A downpour ensues, quelling the raging jungle, setting things right once again. But there’s no time to rest. This is a war, and you’ve got a job to do. Experience the danger, fear, and unpredictability of lethal jungle warfare against a cunning enemy in Vietcong, a first-person action shooter set during the infamous conflict in Southeast Asia! Command expertly trained members of the U.S. Special Forces on critical missions through dangerous territories! You are the leader of one of the finest fighting forces ever assembled. It's time to show the world what you’re made of. Vietcong: Fist Alpha Hurling players into the thick of the battle in Vietnam's highlands, Vietcong Fist Alpha offers up seven unique single-player missions, in addition to eight new multi-player maps, all including co-op mode, expanding upon the action-packed jungle experience enjoyed in Vietcong. Six all-new weapons, including the addition of bayonets and machetes heightening the hand-to-hand combat element of the game, and even heavier artillery filling the smoky skies with a shower of shells on both the US and NVA alike, ensure Vietcong Fist Alpha is an even more enthralling experience than before. Players will also feel the wrath of the awesome B52 Bombers, F-105 Thunderchiefs and F4 Phantom Fighters as they reign terror over the skies.