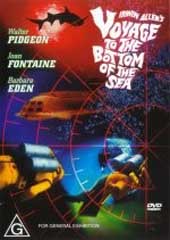 A routine scientific expedition to the North Pole turns into a race to save all mankind when a radiation belt in space causes a fiery inferno on Earth. Admiral Nelson (Walter Pidgeon) and the crew of the atomic submarine Seaview battle saboteurs, giant sea-creatures and attacks by enemy submarines as they race to prevent global catastrophe. Renowned disaster film producer, Irwin Allen, produces and directs an all-star cast including Joan Fontaine, Barbara Eden, Peter Lorre, and Frankie Avalon. The stunning visual effects and breathtaking underwater photography make this one of the most respected Sci-Fi adventure classics of all time.