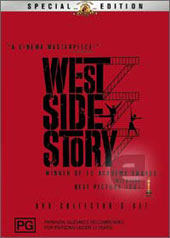 Unavailable
Sorry, this product is not currently available to order
The Screen Achieves One of the Great Entertainments in the History of Motion Pictures.

Winner of no less than ten 1961 Academy Awards, including a special Oscar for Jerome Robbins for his choreography, West Side Story is Shakespeare's 'Romeo and Juliet' transported to the slums and racial tensions of contemporary New York. A tough and trenchant musical, its highlights include a sensational opening ballet as the twin gangs - the Jets and the Sharks - flex their musical muscles, to a sublime Stephen Sondheim-Leonard Bernstein score that includes 'Maria', 'Tonight', 'Something's Coming' and the satirical 'I Like To Be In America'. The impressive cast is headed by Natalie Wood as Maria, with fiery Rita Moreno and elegant George Chakiris.