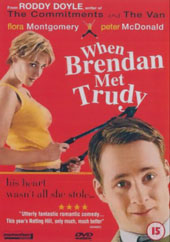 This Dublin comedy concerns Brendan, a studiously shy teacher, so immersed in film lore that almost every waking moment reminds him of something he has seen; and Trudy a bright, gregarious, free-willed girl (Flora Montgomery) who he meets in a pub. In spite of their polarities and disastrous first steps together, a powerful attraction draws them close.

This agreeable comedy is studded with in-jokes for film buffs, some of which are arcane except to the most dedicated. There are plenty of non-film related delights too. Under Kieron J Walsh's direction this is a sprightly ‘odd couple’ yarn brimming with sweet Irish charm.