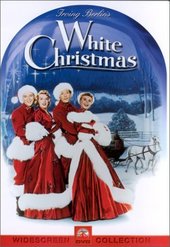 Unavailable
Sorry, this product is not currently available to order
Hollywood filmmakers have long known that a hit song can often form the basis of a hit film. Not surprisingly, what was for many years the biggest popular hit song of all time made for a sizable hit film in 1954. White Christmas (based on a song introduced in the film Holiday Inn) is also a surprisingly good film, in no doubt part to the A-list cast and crew (it was directed by Michael Casablanca Curtiz) and a raft of great Irving Berlin songs. Bing Crosby stars as popular singer Bob Wallace. The opening sequence finds Wallace in the army (always fertile ground for Berlin's songwriting talents) during WWII, where together with Private Philip Davis (Danny Kaye), Wallace is putting on a combination Christmas show (complete with the title song) and farewell to their beloved commanding officer, Gen. Waverly (Dean Jagger). When a bomb hits, Davis saves Wallace's life, and extracts from him a promise that after the war Davis will get a shot at teaming up with him on stage. They eventually become a huge hit. When they meet two musical sisters, Betty and Judy Haynes (Rosemary Clooney and Vera-Ellen), romance seems to be in the cards. Over a Christmas break, they travel to Vermont for the snow and a gig at a ski lodge. Alas, there's no snow and the lodge is deserted. Lo and behold, this disaster of a ski lodge is owned by none other than Gen. Waverly. Bing and friends concoct a scheme to help the general out and let him know he's remembered fondly by his men, but not before busybodies involve themselves and threaten to not only mess up this plan, but the romances too. The film has a goodhearted feeling to it, tied in closely with loyalties and respect that one doesn't see in movies any more. Part of this is no doubt tied to different attitudes toward the citizen army with a clear goal of World War II vs. the professional army with more nebulous objectives of Vietnam and other wars. Berlin's score, though heavily sentimental toward the military, is surprisingly restrained in its jingoism. As Clooney notes in the commentary, this film almost felt as if it was a tying up of loose ends from the war; although the boys had been home for a while, the sentiments of the holidays and being back with the family were nicely pulled together in the title song. Crosby as always essentially plays himself, the deceptively easygoing workaholic and perfectionist. Kaye offsets Crosby nicely as a teammate. His comedy, singing and dancing skills (he literally dances rings around Crosby) are well suited to the tone of the film. Clooney is a better singer than she is an actress, but both she and dancer Vera-Ellen are better than tolerable as female interests. Clooney in particular is sharp and seductive in her big number, Love Didn't Do Right By Me. Jagger is effective as the gruff-but-lovable cliche, and character actress Mary Wickes really shines as Waverly's aggressively nosy housekeeper. While at first blush the film has a "let's put on a show, kids," air reminiscent of a Garland-Rooney opus, the fact that these are professionals with connections is emphasized, as is the fact that the undertaking is difficult, expensive and requires extensive coordination and rehearsal time. Many of the musical numbers are seen primarily in rehearsal; where we see the finished number the difference is often astounding. The Berlin songs (the title song opens and closes the film) are in general well selected and suitable (although Snow is quite insipid and painful to listen to more than once); Berlin wrote three new songs for this score, as well as supplying classics such as Blue Skies which is unfortunately presented in rather truncated form. All in all, an irresistibly uplifting and feel-good experience that's recommended for family holiday viewing. Special Features:
Release date Australia
December 15th, 2005
Movie Format
DVD Region
Edition
Aspect Ratio
Director
Michael Curtiz
Language
English, French
Length (Minutes)
120
Stars
Studio
Paramount Pictures
Original Release Year
1954
UPC
9324915057722
Product ID
1476781