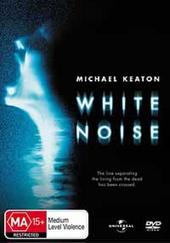 This stylish thriller will appeal to both suspense fans and those fascinated with mankind's quest to communicate with the dead.

Successful architect Johnathan Rivers (Michael Keaton – Beetlejuice, Batman) is shattered by the sudden disappearance and death of his wife Anna (Chandra West). The grieving Jonathan wallows in emotional confusion until he is unexpectedly contacted by a paranormal expert Raymond Price (Ian McNiece), who claims to be receiving messages from Anna through a process known as EVP (Electronic Voice Phenomenon).

EVP is the process by which the dead, through sound and image, communicate with the living through the static and ‘white noise’ of modern electronic devices.

Sceptical at first, Johnathan soon becomes convinced of the validity of the messages being communicated to him and so begins his obsession with trying to contact Anna on his own. As he dabbles himself with EVP and the supernatural, he unwittingly opens a door to another world, allowing something uninvited and destructive into his life.

Written by Niall Johnson, White Noise is directed by Geoffrey Sax (Doctor Who: The Movie UK 1996) and is a chilling exploration of a paranormal realm beyond our comprehension and is guaranteed to have the hairs on the back of your neck standing up!