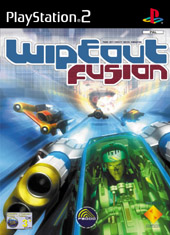 Unavailable
Sorry, this product is not currently available to order
This latest version of the cult anti-gravity racing game is set almost exactly one hundred years after the original. It is 2150, a time of huge technological advances and The Federation have decided to make use of these advances: the time is ripe for a new Wipeout F9000 League, with more teams, more craft per race, and more venues.

Wipeout Fusion makes full use of the massive potential of the PS2â€™s Emotion Engine hardware to re-define the meaning of speed and produce stomach-churning racing action against a backdrop of graphical splendour and a thumping soundtrack. It incorporates sophisticated dynamic lighting, interactive scenery in diverse locations and myriad particle effects to create a futuristic and atmospheric environment in which to race.

Tracks are dotted about the globe in seven huge racing venues, each with its own interactive features, three courses of increasing difficulty and differing terrain provide racing variety. There are jump ramps; special trigger pads that raise and lower bridges and open and close routes; crossroads that have a tendency to encourage pile ups; new air jumps that throw the ships vertically into the air and even an astonishing gravity pad that instantly flips your ship 180 degrees to race on a piece of track directly overhead. Some even have free-running areas that donâ€™t limit the pilots to following the track, along with shortcuts for experienced players to take advantage of.

The craft themselves are far more sophisticated: where the original Wipeout vehicles had seven parameters to control their movement and handling, the new craft have 48, giving unprecedented control, superb manoeuvrability and blinding speed in excess of anything capable in conventional racers.

Craft are also more varied than previously with much greater difference in handling characteristics â€“ itâ€™s quite possible to be rammed off the circuit by heavier vehicles (in fact one team specialises in this tactic) â€“ and slightly different race setups even within the same team. The superior technological capabilities of the PS2 mean that there are also more craft racing on the track at any one time than ever before, with 16 speed-freaks putting pedal to the metal and thumb to the missile launcher.

Each craft also has an upgrade path with six different improvable performance parameters. Conversely, improved ship-to-ship collision effects and breakable sections, along with a cumulative damage feature that builds to affect handling and performance, can mean that in the end the ship is completely destroyed and the pilot forced automatically ejected, for collection and retrieval by rescue droidsâ€¦

Improved ship and pilot A.I. mean that rivals act â€“ and react â€“ more realistically than in any other racing game. The introduction of an innovative new individual driver character feature means that there are drivers of different skills, ability and driving styles, who block, ram and make driving errors. There are even popular and unpopular racers. Pick a hated character and your race will be a whole lot more eventful, as rivals go out of their way to set you up and take you out; similarly, if you continually target and hinder another character, watch your back - they will remember, bearing a grudge not just in that race, but throughout the season!

Foremost among the many new features is the greatly enhanced arsenal of weapons at your disposal. To aid your chances of victory you have both standard weapons and team-specific super-weapons producing effects of spectacular ferocity; as well as an array of carefully selected power-up pads dotted at strategic intervals about the tracks and specialised weapons for multi-player mode.

There are also more playing modes than ever before â€“ six in all, including a revised arcade mode, the full league option and an elimination mode; as well as time trial and endurance racing and a secret zone mode. Throw in unlockable reversed track racing and you have 42 tracks in all, providing unrivalled breadth and longevity of gameplay.

Wipeout Fusion promises to provide not only the fastest and most adrenaline-pumping racer on the PS2, but also the most complete racing experience on any system.
Release date Australia
December 14th, 2003
Game Platform
Publisher
Sony Computer Entertainment
UPC
711719305125
Product ID
1456229