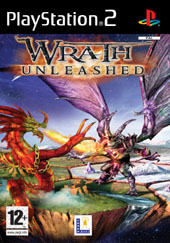 The strategy portion of this game is actually really good. There is a wide enough range of units and spells to keep you amused. The AI plays well enough, the graphics do their job. This part of the game is very successful.

The one-on-one battles are good enough. There is six different types of attacks you can carry out. The AI sometimes lacks a challenge though as battles can be won solely through button mashing.

The game fails outside of this, in particular the long loading times. The game loads for 15 seconds before and after everyone one-on-one monster battle. The battles also don't feel like their connected. You don't feel like all these fights are going towards your goal of winning the Throne of Gaea. I think there should have been one long campaign with a decent story rather than four short ones.

All in all, this game is surprisingly good. But bad loading times and storyless campaigns knock two stars from this otherwise decent game.

Mythological creatures from the dawn of time. Epic contests between darkness and light. Battles for domination of giant floating arenas. Welcome to the fantastic, deadly world of Wrath Unleashed. Part intense fighting-action. Part thought-provoking strategy. Pure vicious head-to-head mayhem. This unique action-strategy game pits up to four players and an array of all-powerful fantasy creatures against each other. And you'll need to unleash every bit of your wrath upon the world to win.