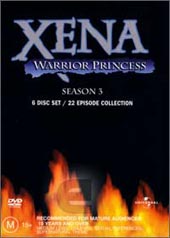 Unavailable
Sorry, this product is not currently available to order
Xena, defying Furies who would have her kill her own mother, finds her relationship with Gabrielle severely put to the test. Beginning in Britannia where they join Boadicea, to continue their fight against Caesar, Gabrielle is abducted and impregnated with the incarnation of Dahak. Her child, Hope, is born under Xena's protection and has to be set free down a river to seek her own destiny.

They journey on to China, against Gabrielle's wishes, so that Xena can fulfil an old debt, while here she is betrayed by her faithful friend and is only saved by her knowledge of ancient magic. Callisto returns - released by Hope - and Xena's son Solan is killed. Xena blames Hope and ultimately Gabrielle, creating a rift in their relationship which may never be healed.