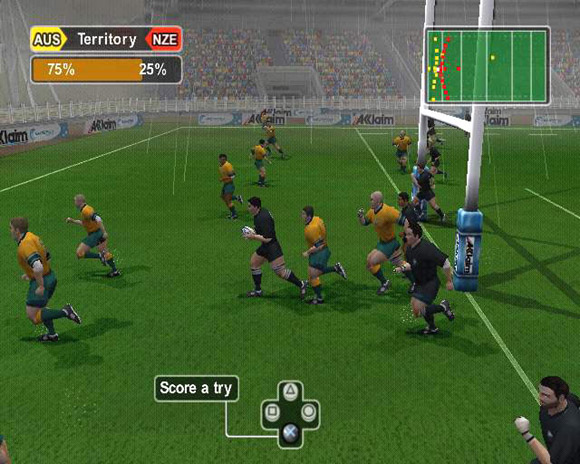 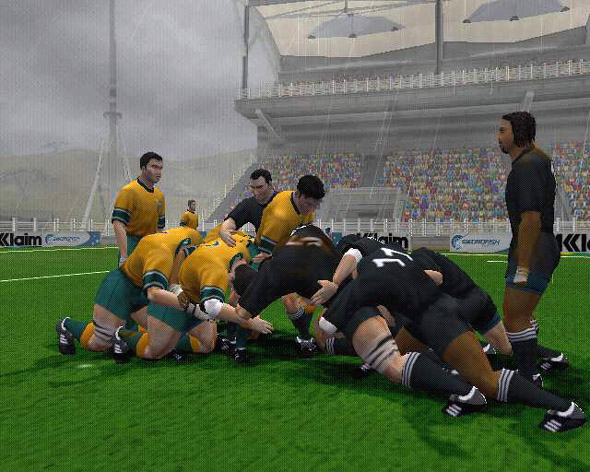 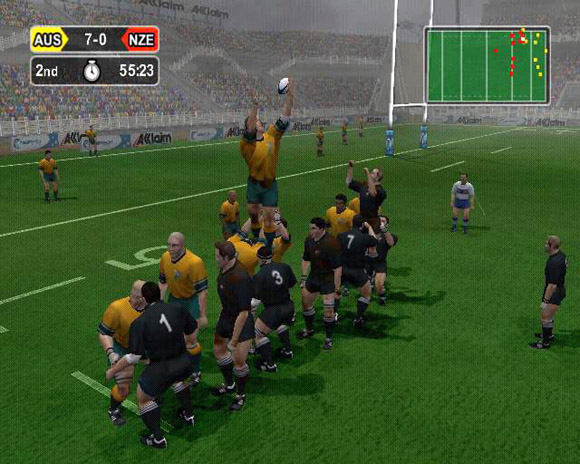 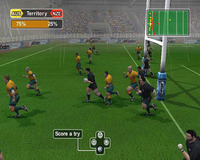 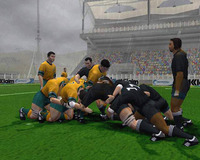 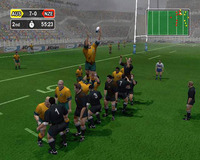 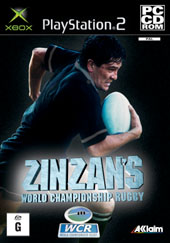 A very different approach to a rugby game than Rugby 2004. The All Black team is completely unlicensed, so players like Ugo Touhy (Tana Umanga) make appearances, and you can pretty much figure out who everyone is. The English team, however, is licensed, and Johnny Wilkinson even does his little Teapot impression before conversions.

This game is an arcade style as opposed to simulation. Forward passes go mainly unpenalised, as well as similar offences. Agressive tackles can be used, as well as ankletaps and just holding on to them. Sprinting, impressive stepping (including the Rokocoko spin) and handoffs are also in the fray.

Another feature worth mentioning is the Classic Matches. There are a dozen or so classic matches to be played, such as playing the All Blacks vs. England and having to get 4 tries with ‘Wendall Hawkes’ aka Jonah Lomu, as well as the 2003 World Cup Final, where you have to play as England then Aussie. In the final classic match, you play as a Swordfish team, and have to verse a team of 15 Jonahs, which makes for a hard game.

There is also a survival mode, and a mode where you play the world champions with increasingly weak teams, the weakest being Namibia.

All in all, an excellent game, which is a better play than Rugby 2004, despite the lack of statistics and licensing.

The game is being developed by Swordfish Studios, one of the UK's respected independent game development studios. Based in Birmingham and with over 10 year's development experience, the team was responsible for one of the most critically acclaimed rugby video games – Jonah Lomu Rugby. "World Championship Rugby will set the new benchmark for rugby games," commented Larry Sparks, Vice President, Marketing, Acclaim International. "The same highly talented development team, still together under Swordfish Studios, was responsible for creating one the greatest rugby games of all time. Since that original game the studio has received countless requests from gamers wanting a follow-up. I'm quite sure that fans of the original will be delighted to hear that the team is now committed to delivering the most compelling, hard-hitting, highly playable rugby game for next generation systems and PC. It will be a game that really delivers what they want - a game that's so real it hurts!" "We really enjoyed developing the original Jonah Lomu game; but with our cutting-edge technology, designing a rugby game for next-generation consoles is even more exciting. We are totally focused on ensuring World Championship Rugby delivers on our promise to give gamers and fans the best rugby game yet." commented Trevor Williams, Managing Director, Swordfish Studios. World Championship Rugby will be released in April 2004 for the PlayStation®2 Computer Entertainment System, XboxTM and PC.
Release date Australia
May 28th, 2004
Game Platform
Developer
Swordfish Studios
Publisher
Acclaim
UPC
5039225231918
Product ID
1461507