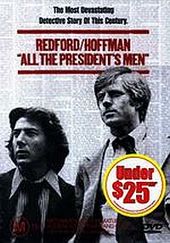 In the Watergate Building, lights go on and four burglars are caught in the act. That night triggered revelations that drove a US President from office. Washington reporters Bob Woodward and Carl Bernstein grabbbed the story and stayed with it through doubts, denials, discouragement.

"It helps to have one of history's greatest scoops as your factual inspiration, but journalism thrillers just don't get any better than All the President's Men. Dustin Hoffman and Robert Redford are perfectly matched as (respectively) Washington Post reporters Carl Bernstein and Bob Woodward, whose investigation into the Watergate scandal set the stage for President Richard Nixon's eventual resignation. Their bestselling exposé was brilliantly adapted by screenwriter William Goldman, and director Alan Pakula crafted the film into one of the most intelligent and involving of the 1970s paranoid thrillers. Featuring Jason Robards in his Oscar-winning role as Washington Post editor Ben Bradlee, All the President's Men is the film against which all other journalism movies must be measured."--Jeff Shannon