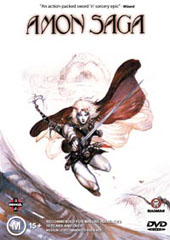 Unavailable
Sorry, this product is not currently available to order
Set in a barbarous world of magic and mysticism, this action-packed tale of intrigue and adventure follows the exploits of Amon - a young man on a desperate quest to avenge the death of his mother. When his hunt leads him to the castle of the Emperor Valhiss, Amon must endure the perils of initiation and join the ranks of the Imperial army in order to gain an opportunity to take his revenge. But once within the heart of the fortified city, Amon unexpectedly encounters the princess Lichia - the sultry daughter of King Sem Darai. The Emperor hopes to exchange the princess for a map in the King's possession, but what is the Emperor's ultimate goal? Featuring character designs by the incomparable Yoshitaka Amano (Vampire Hunter D), Amon Saga is anime at it's finest. Features:
Release date Australia
January 1st, 2003
Movie Format
DVD Region
Edition
Aspect Ratio
Language
English, Japanese
Length (Minutes)
90
Studio
Vendetta
Subtitles
English
Supported Audio
Genre
Original Release Year
2001
UPC
9322225008236
Product ID
1459882