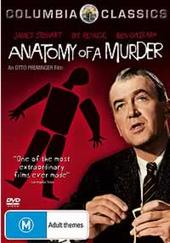 A riveting courtroom drama of rape and premeditated murder is brought to life with an all-star cast in the suspenseful and highly-acclaimed ANATOMY OF A MURDER. Nominated for seven Academy Awards including Best Picture (1959). The film pits a humble small-town lawyer (James Stewart) against a hard-headed big city prosecutor (George C. Scott). Emotions flare as a jealous army lieutenant (Ben Gazzara) pleads innocent to murdering the rapist of his seductive, beautiful wife (Lee Remick). Produced and directed by the renowned Otto Preminger, the film features a brilliant score by Duke Ellington. Packed with drama, passion and intrigue, ANATOMY OF A MURDER is a cinematic masterpiece that will keep you on the edge of your seat!

“An exercise in moral ambiguity and borderline procedural, Preminger's roots as a student of law in his native Austria certainly pay off for what may arguably be one of his best films.”

“Otto Preminger's cynical view of the judicial system is curiously contemporary and still serves as a blueprint for numerous TV 'tec shows.”

“Otto Preminger, no stranger to ruffling moral-watchdog feathers, never succumbs to the sleaziness inherent in the material, instead turning out an intelligent and tightly controlled drama that ranks as one of the all-time great courtroom procedurals.”