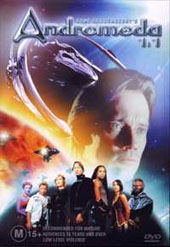 Due to COVID-19, we're unable to accept new orders at this time. Learn more...
Set in deep space, Gene Roddenberry’s ANDROMEDA chronicles the efforts of Captain Dylan Hunt (Kevin Sorbo) and his crew as they try to restore a government that once presided over an extended period of peace and prosperity. Betrayed from within, the civilization spanning three galaxies was plunged into chaos. After plunging into a black hole, Dylan and the remaining crew of the “Andromeda Ascendant” are rescued by the salvage ship Eureka Maru to discover that 300 years have passed, and their entire world is in ruins. It is now up to an eclectic band of heroes to reunite the diverse cultures of the known worlds.

Under The Night
Captain Dylan Hunt and his ship the Andromeda Ascendant are rescued by the Eureka Maru, an opportunistic salvage ship, after being trapped in the event horizon of a black hole for 300 years.

The Andromeda Ascendant is a massive starship of the Systems Commonwealth High Guard that sets out on mostly diplomatic and humanitarian missions. A masterful blend of form and function, the Andromeda Ascendant is controlled by a sophisticated artificial intelligence unit and is also a fully sentient being, capable of appearing in human form via holograms.

The Andromeda suddenly finds herself under attack from an enormous fleet of Nietzchean ships, leading Captain Dylan Hunt (Kevin Sorbo) to believe they were fleeing from a rogue black hole. Outnumbered by the enemy, Andromeda's only chance for survival is to speed away from the attackers and head into the direction of the black hole. During the crisis, Dylan orders his crew to abandon ship. He is left in a state of suspended animation when the starship becomes trapped in the orbit of the black hole.

After three centuries, the Andromeda Ascendant is discovered by a salvage-mining vessel, the Eureka Maru, and owner Beka Valentine (Lisa Ryder) and her colourful band of crew members, hope to make a fortune selling it.

An Affirming Flame
Dylan and the crew of the Eureka Maru agree to join forces and become one team aboard the Andromeda Ascendant as they set forth on his mission to restore the Systems Commonwealth.

Gerentex (John Tench) who commissioned the salvage-mining vessel and it's band of mercenaries, continues the mission to take over the Andromeda Ascendant and kill Captain Dylan Hunt.

Dylan thwarts his attackers through a series of ferocious battles.

Trance (Laura Bertram) suggests to Gerentex that they abort the mission and leave Dylan alone, whereupon he kills her.
Meanwhile, having successfully hacked into the computer system, Harper (Gordon Woolvett) turns himself into a computer virus and infects Andromeda. Harper's virus fails and knowing any further efforts are futile, Gerentex orders Harper to prepare the Eureka for launch. Leaving everyone else behind on the Andromeda, Harper intentionally leaves a trail of pion particles that will lead those on board the Andromeda to Gerentex.