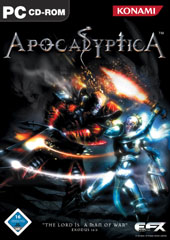 Unavailable
Sorry, this product is not currently available to order
With mankind on the brink of extinction, a number of military heroes are recruited to enter each of the Dark Lord's planetary strongholds on his base planet Nu-Hades and free them from his evil regime. The player must thus decide to side with the quest for liberation, or to ally with the Dark Lord. To this end, one of 16 good guys or 16 evil doers must be chosen, before the player guides them and three loyal cohorts through Apocalyptica's breath-taking 3D worlds. Each of Apocalytpica's stages is depicted as visually resplendent and fully interactive 3D locales. Using the specially created 'Evolution' engine, the free-roaming action is propelled at an incredible pace, with no loss of speed during its many combat sequences. Likewise, Extreme FX has also incorporated an incredible level of aesthetic detail to bring Nu-Hades strongholds, sewers, and wastelands to life. Apocalyptica mixes exploration and combat elements as its engrossing tale unfolds. Each of the game's impressive worlds throws up a new challenge, with the player charged with retrieving key items or performing specific duties, while simultaneously fending off the advances of the rival faction. In line with Apocalyptica's fast-moving action, each character is equipped with projectile and handheld weaponry, offering the user two key forms of attack, while while wcertain characters are also capable of using spells to counter enemy attacks. In balance, however, the opposing forces enjoy an incredible level of AI, and are also given specific missions that, if completed, will result in the total annihilation of the player's unit. Extreme FX has also added an additional layer of the depth to the title, with both LAN and online modes allowing up to 32 users to compete in a series of 'Death Match' and mission-related quests. These are ideally designed to showcase the speed and frenetic action the game enjoys, and shows off the assorted melee and missile attacks the dual-weapon systems afford the user. Apocalyptica will also be the first title from Konami of Europe to support the Xbox Live online service. The Xbox version of the game will allow up to eight combatants to battle it out in a series of 'Death Match' scenarios, using the Microsoft technology to also taunt their adversaries in the heat of battle. With its incredible visuals, believable 3D worlds, end-of-level 'Boss' confrontations, and tough objectives, Apocalyptica is a welcome addition to Konami's roster of titles. It also continues Konami of Europe's ongoing pledge to create original, cutting edge titles for the leading formats, with the events on Nu-Hades guaranteed to entertain and enthrall PC and Xbox owners on release.
Release date Australia
February 3rd, 2004
Publisher
Konami
Game Platform
Product ID
1460440