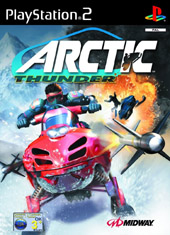 Unavailable
Sorry, this product is not currently available to order
Arctic Thunder is a fast-paced, battle-intensive snowmobile racing game that pushes the limits on speed, as well as hand-to-hand and weapon combat. Armed with an arsenal of weapons to choose from (atomic snowballs, proximity missiles and super attacks), the characters in Arctic Thunder possess unique skills and personalities matched with their own custom snowmobiles. Choose from racing veterans – Agent 5, Candy, Dirty McKurdy, Mai Zhou Lin, Ponzo and Willie Quinn – or unlock more than ten additional hidden characters.

In addition to the high-speed, over-the-top races, Arctic Thunder also features a multiplayer battle arena mode, where two to four players battle head-to-head in an enclosed ice arena. Players must use an array of explosive weaponry and strategic weapon combat tactics in order to destroy their opponents.

Race through 12 wild, nail-biting courses, each with a unique setting. Choose from six open courses: Blizzard in DC, Lost Himalayan City, Chernobyl Meltdown, Swiss Alps, Haunted Forest or Alaskan Pipeline. Players can also unlock up to six hidden tracks: Sports Arena, Logging Camp, UFO, China, Atlantis and Theme Park. Throughout the game, players can perform tricks to get points to upgrade their sled to pave their way to victory.

Hand-to-Hand Combat – Punch and kick opponents off their snowmobiles

Fifteen Plus Characters – Six released including Willie Q., Candy and Agent 5, with more than ten hidden

Upgrade Shop – Increase the snowmobile’s power, the number, strength and accuracy of power-ups