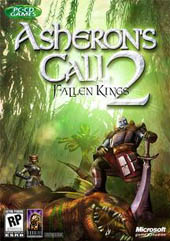 Due to COVID-19, we're unable to accept new orders at this time. Learn more...
"Asheron's Call 2" is the next generation fantasy MMORPG in which the world dynamically evolves around you. Enter a land devastated by a magical disaster, where the players must rebuild the world. "Asheron's Call 2" features an all-new graphics engine, combat system and dynamic content system to deliver a rich, engaging fantasy world where world-shaking changes sweep you along an epic story-line.

*NB* Special circumstances for the billing of this game, please check with us before you order if you are unsure.