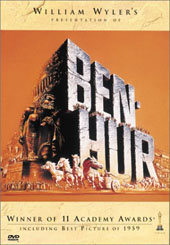 This is a unique classic movie which will amaze you with its special effects and enormous cast. There are many daring battle and chariot race scenes which will keep you enthralled. It is set in the final days of Jesus' time before his death and covers the story of Judah Ben Hur and how a simple accident almost destroys his family as well as himself. It is a story of power, control, hitting rock-bottom and fighting your way back. Outstanding movie of it's time and still a classic well-worth viewing in the present time.

The World's Most Honored Motion Picture Arrives On DVD! Judah Ben-Hur lives as a rich Jewish prince and merchant in Jerusalem at the beginning of the 1st century. Together with the new governor his old friend Messala arrives as commanding officer of the Roman legions. At first they are happy to meet after a long time but their different politic views separate them. During the welcome parade a brick falls down from Judah's house and barely misses the governor. Although Messala knows that they are not guilty he sends Judah to the galleys and throws his mother and sister into prison. But Judah swears to come back and take revenge.