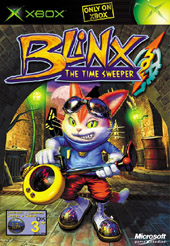 Due to COVID-19, we're unable to accept new orders at this time. Learn more...
Blinx: The Time Sweeper is a fast-paced action game featuring a cool, clever new character in wild, warped worlds. The ability to control the flow of time provides a totally new gaming experience only possible on Xbox.

Blinx is a cat on a mission to fix glitches in time. With the aid of his trusty and powerful Time Sweeper, the TS1000, Blinx recovers lost time crystals and fights Time Monsters in his attempt to rescue a kidnapped princess and return order to the world.