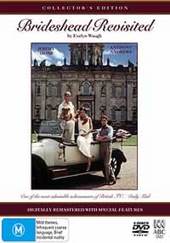 Loved this when it was first on, now can enjoy it again & avoid reality programs & sport. The actors portray the characters well with an understated quality.

1 out of 1 people found this review helpful.
The legendary television series, BRIDESHEAD REVISITED, based on the 1945 novel by Evelyn Waugh, is included here in its entirity. Set in the glittering, yet fading world of the British aristocracy, the series stars the astonishing trio Jeremy Irons, Anthony Andrews, and Diana Quick, and features stunning performances by Sir John Gielgud, Claire Bloom, and Sir Laurence Olivier.

Brideshead Revisited opens in England on the eve of the World War II. Charles Ryder (played by Jeremy Irons), the main character and narrator, is presented as a rather incompetent officer in the British Army. He stumbles upon an English country house, which he has visited more than twenty years before.

Fill a bowl with alpine strawberries, break out the Château Lafite (1899, of course), and bask in this benchmark 1981 British miniseries based on Evelyn Waugh's classic novel. Adapted for the screen by John Mortimer (Rumpole of the Bailey), this impeccable, nearly 11-hour production mesmerized American viewers during the course of its PBS run in 1982. In his breakthrough role, Jeremy Irons stars as Charles Ryder, a disillusioned Army captain who is moved to reflect on his "languid days" in the "enchanted castle" that was Brideshead, home of the aristocratic Marchmain family, whose acquaintance Charles made in the company of an Oxford classmate, the charming wild child Sebastian. Anthony Andrews costars as the doomed Sebastian, whose beauty is "arresting" and "whose eccentricities and behavior seemed to know no bounds." The "entitled and enchanted" Sebastian takes Charles under his wing ("Charles, what a lot you have to learn"), but vows early on that he is "not going to let [Charles] get mixed up with [his] family." But mixed up Charles gets. He becomes a friend and confidante, not to mention a lover, to Sebastian's sister Julia (Diana Quick). Meanwhile, the self-destructive Sebastian's life spirals out of control. Brideshead Revisited boasts a distinguished ensemble, including Laurence Olivier in his Emmy Award-winning role as the exiled Lord Marchmain, Claire Bloom as Lady Marchmain, and the magnificent John Gielgud as Charles's estranged father. Grand locations and a haunting musical score make this a memorable revisit of an irretrievable bygone era. For those who scheduled their weeks around the original Monday-night broadcasts or those visiting Brideshead for the first time, this boxed set release will be, as Charles rhapsodizes at one point while strolling the castle grounds, "very near to heaven." --Donald Liebenson
Release date Australia
January 26th, 2006
Movie Format
DVD Region
Edition
Aspect Ratio
Director
Various
Language
English
Length (Minutes)
660
Stars
Studio
Roadshow
Subtitles
English for the Hearing Impaired
Supported Audio
Original Release Year
1981
Box Dimensions (mm)
138x190x30
UPC
9398710516098
All-time sales rank
Top 5000
Product ID
1477558