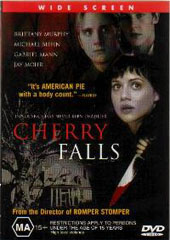 Cherry Falls is a quiet town until a serial killer begins preying on high school students. After the third teen murder, the killer's pattern emerges: the victims were all virgins. The Sheriff, concerned for the teenagers in general, but more importantly, his own daughter Jody, calls a town meeting which deteriorates into chaos.

Once the students realise that to save their skins, they're going to have to lose their virginity, a meet-and-mate bash is planned. Jody, still a virgin, finds herself at the centre of the mystery and mayhem. As the student's “Pop Your Cherry” party gets going, Jody takes matters into her own hands… in more ways than one!