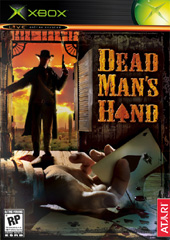 Unavailable
Sorry, this product is not currently available to order
Dead Man’s Hand is an action-oriented first person shooter set in the grandeur and danger of the American Old West. Chock full of gun fights and dripping in frontier lore, Dead Man’s Hand thrusts players into the spurs of El Tejón, a master gunslinger riding with one of the roughest gangs in the West, known as The Nine. When the ruthless leader of The Nine betrays El Tejón, he turns to a life of vengeance, vowing to put every member of his former gang six-feet under. Through an epic single player story of vengeance and betrayal, the player will travel the American Frontier, experiencing bar fights, shoot outs, stagecoach chases and other definitive Western scenes. Dead Man’s Hand captures the action and drama of the Old West with six-shooters, rifles, black hats, horses, hombres, dancing girls, riverboats, saloon poker and many other iconic images. Dead Man’s Hand incorporates unique gameplay elements taken from the Old West. Gamers will try their hands at blasting desperados from the back of their trusty steed and shooting it out on a moving train. In addition, as the game progresses, players will acquire “Legend,” a unique scoring system that awards points as the player blazes a path into Western folklore. When accumulated, Legend will allow the player to pull off amazing trick shots and death-defying feats. Players will also be able to pick their own path through the game, selecting from mission choices to meet their abilities. In development by Human Head Studios, the creators of Rune, Dead Man’s Hand uses the latest Unreal technology from Epic Games to provide amazing graphical performance, non-stop action and enhanced multiplayer capabilities through Xbox Live! Game Features: * More than 20 adventures to challenge gamers through the deserts, hills and towns of the old southwest, across the mountains and mine shafts of the great northwest, and in the riverboats and cities of the Midwest * Vast maps featuring detailed indoor and outdoor locations, from rickety old saloons to sprawling mountain vistas to dark mysterious mine shafts * Nine different Old West firearms to choose from, modeled after the actual pistols, shotguns and rifles that made the Old West famous * Other “Wild West” weapons include knives, dynamite and whiskey bombs, as well as fixed Gatling guns and cannons * Multiplayer competition via Xbox Live! as well as split screen multiplayer support. A variety of competitive and cooperative play modes will be available * A sophisticated in-game physics engine makes hats fly off enemies, bad guys fall off roofs, barrels tumble, furniture shatters, and wagons buck and bounce realistically * Human Head’s unique “Semi Persistent World” technology (SPeW) enables varying terrain as well as multiple missions to be played on the same map and reveals new missions as the game progresses * Saloon poker -- players are able to play a poker game before each mission to earn bonuses such as additional health or ammo.
Release date Australia
May 4th, 2004
Game Platform
Publisher
Atari
UPC
3546430108161
Product ID
1460463