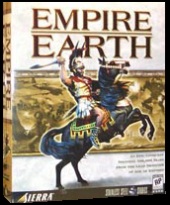 This Game is Pretty cool, but a lot of small things put it out of place. I like how Empire Earth Spans the Whole of Human history and the campaigns are mean. but everything else isnt that good. not really up to todays strategy game standards

From Prehistory to the Nano Age of the 22nd Century, Empire Earth serves up RTS on an epic scale.

Command history’s best known civilizations such as the Greeks, English, French, or Germans, or create and customize your own from scores of unique attributes. Colonize or conquer surrounding territories and establish new settlements. Plan and build walled towns and city-states. Construct Temples and Hospitals to protect and enhance your growing empire. Town Centers inspire defenders to fight harder and can be transformed into powerful Capitols. Wood, gold, iron and other natural resources provide the raw materials for expansion, while intelligent citizens keep your economy running smoothly. Over a dozen technology tracks offer numerous opportunities for further advancement.

Train more than 200 types of combat units from every era in history, including Earth’s future. Instantly enhance the combat abilities of your troops with specific improvements. Lead your armies to glorious victory with the help of Charlemagne, Cromwell, and other great heroes from yesterday, today, and tomorrow. Carry out surprise assaults in the dead of night. Attack unsuspecting enemies with stealthy submarines and aircraft. Soften up an enemy position with artillery fire, carpet bombing, or off-shore shelling. Wage epic air battles with over 30 types of aircraft such as Sopwith Camels, Spitfires, F-15s, Apache Gunships, and B-2 Bombers. Fight massive naval engagements with more than 40 kinds of ships, including 16th Century ships-of-the-line, U-boats, and modern aircraft carriers. Train colossal Mechs to fight the battles of the future.

In Empire Earth, the military option is just one possible path to victory. Convert an enemy’s citizens with furtive priests. Instruct a prophet to invoke devastating calamities such as volcanoes, earthquakes, and plagues. Or demonstrate your civilization’s superiority by constructing Wonders of the World. Each Wonder endows your civilization with a special ability, such as the power of self-healing or mass-conversions.

Epic scope – spans over 500,000 years, from the discovery of fire to laser technology and beyond.

14 different Epochs – replay all of human history or just the span of time that interests you.

Battle on land, air, and sea – in addition to armies, you can build wide varieties of ships and aircraft.

Enlist great historical Heroes – such as William the Conqueror and Patton – to enhance your military abilities.

Customize your military units by improving their strength or equipment.

Play in Standard mode for a more-strategic empire building game or Tournament mode for faster-paced action.

Have your Prophets devastate opponents with Calamities such as hurricanes, earthquakes, and deadly plagues.

Increase the morale of your soldiers to improve their offensive and defensive capabilities.

Match wits with the cunning AI or coordinate attacks with your computer-player allies.

Temples, Universities, and other buildings provide additional defensive measures beyond walls and towers.

Create your own civilization from 100 different attributes or choose from 21 predefined civilizations.

Different paths to victory, including military conquest and constructing Wonders of the World.

Six different Wonders, each with its own special power.

Experience expertly balanced gameplay – each unit has its strengths and weaknesses.

Gather 5 different resources that vary in importance depending on your strategy.

Training scenarios guide you through the basics of game play.

Gorgeous random maps of various types and sizes for the ultimate replayablity.

Create your own original maps, scenarios, campaigns, and even in-game movies with the included editors.