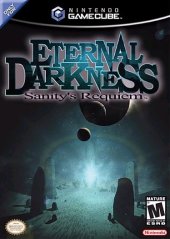 Due to COVID-19, we're unable to accept new orders at this time. Learn more...
Behold a unique genre: the "psychological thriller". As the player's "sanity meter" drops, both the character and player will question what is real and what is merely in their head. Characters will react to their environment according to their mental state.

In a story that spans space and time, Eternal Darkness: Sanity's Requiem introduces 12 controllable characters through the last 2000 years of history, from ancient Rome to modern day. The story revolves around a young woman, Alexandra Rovias, who travels to Rhode Island to investigate the mysterious death of her grandfather. As the game unfolds, Alexandra experiences events through the game's other characters and eventually discovers the secret of human history.