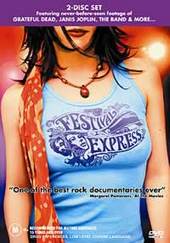 Unavailable
Sorry, this product is not currently available to order
In 1970, a chartered train crossed Canada carrying some of the greatest rock bands of all time. Janis Joplin, The Band, The Grateful Dead, The Flying Burrito Brothers and others all lived (and partied) together for five days, stopping at major cities along the way to play a series of concerts.

The entire experience was filmed both off-stage and on, but the extensive footage remained locked away – until now. A momentous achievement in rock film archaeology which combines the long-lost material with contemporary interviews nearly 35 years after it was first filmed.

* Disc One
o Feature Film
o Off The Tracks Over 50 minutes of Never-Before-Seen footage including performances by Janis Joplin, The Grateful Dead, The Band and more.
o Train Hopping Hear the tracks you love, uninterrupted.

The vintage concert footage alone makes Festival Express a memorable and worthwhile endeavor, offering scintillating performances by Janis Joplin, the Band (their rollicking version of "Slippin' and Slidin'" is particularly mind-blowing), the Grateful Dead, Buddy Guy, and others (remember Mashmakhan?). In 1970, during the heyday of the rock festival, promoter Ken Walker decided to organize a traveling musical revue, bringing the mountain to Mohammed, as it were. In five days' time, the festival played in three Canadian cities with the entire conglomeration traveling, playing, and getting smashed together the whole way. Nearly as rewarding as the live performances are the candid scenes of the train ride itself, an endless jam session and party during which musicians of all shapes and sizes let their hair down--musically and otherwise. The contemporary interviews with Walker and some of the surviving musicians aren't particularly noteworthy, except as a way to prove that it all actually happened. Walker comes off as a hero in the film: he treated the musicians like royalty and insisted that the train roll on even though he was losing his shirt. (His financial failure is a large reason why this material stayed in the vaults for so long.) Perhaps the most remarkable scene is an off-the-cuff, LSD-fueled train jam featuring Joplin, the Band's Rick Danko, and the Dead's Jerry Garcia playing the old chestnut "Ain't No More Cane." Danko is so obliterated that even Janis has to ask him if he's OK--when Janis is worried about your state of mind, you must be pretty messed up. --Marc Greilsamer
Release date Australia
January 1st, 2006
Movie Format
DVD Region
Edition
Aspect Ratio
Language
English
Length (Minutes)
90
Stars
Studio
Magna Pacific
Supported Audio
Genre
Original Release Year
2003
UPC
9315842021023
Product ID
1510986