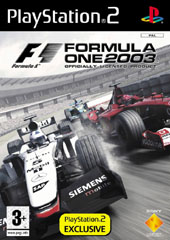 Due to COVID-19, we're unable to accept new orders at this time. Learn more...
FORMULA ONE 2003 is the only game to incorporate all the up-to-date season statistics, as well as the likenesses of all 20 of the official FORMULA ONE drivers and all 10 FORMULA ONE teams with their current liveries. Every one of the 16 official Grand Prix circuits have been mapped to an astonishing level of accuracy, while the exhaustively-researched car performance and specification details are unmatched, thanks to data provided by the teams themselves.