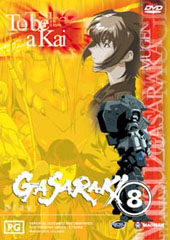 Unavailable
Sorry, this product is not currently available to order
One of the best series to come out of Japan in recent years, GARASAKI is the story of Yushirou, the 4th son of the Gowa family, who provides Japan with special tactical armor. Yushirou possesses supernatural powers that he has only recently become aware of, and begins to suspect that there is much more to his family than he originally thought. Then, in battle one day, he encounters Miharu, a girl who possesses the same powers he does. Believing he has found some pieces from a very large puzzle, Yushirou sets out to uncover the mystery in which he himself is an integral part. Special Features:
Release date Australia
January 1st, 2007
Movie Format
DVD Region
Edition
Brand
Aspect Ratio
Language
English, Japanese
Length (Minutes)
75
Studio
Vendetta
Subtitles
English
Supported Audio
Genre
Original Release Year
2002
UPC
9322225001565
Product ID
1460093