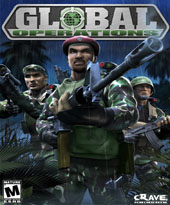 Due to COVID-19, we're unable to accept new orders at this time. Learn more...
In Global Ops, players will get a dose of reality as the multiplayer-focused tactical first person perspective game will feature over 10 real world locations and hot spots as well as more than 30 real life weapons. The game will be available on the PC in 2002.

Global Ops will take players to such real world hot spots as Chechnya, Sri Lanka, Beirut and the South China Seas. Each level seamlessly integrates building exteriors, interiors and terrain to create a realistic and palpable atmosphere that effectively recreates the location. Global Ops will feature over 25 elite fighting forces based on authentic special forces, peace keepers, rebel groups, guerilla forces and terrorist groups. The game will also feature a specialty class system for which players can choose from six customizable specialties including sniper, recon, medic and heavy gunner.

Multiplayer in Global Ops will support up to 24 players. The emphasis will be on co-operative play as teams try to accomplish a wide variety of mission types including hostage rescue, bomb diffusing, escort and base destruction. Players experience a unique troop reinforcement scheme which reinserts players into the game via a parachute, helicopter, APC or beach assault craft. Global Ops will also feature a single player game with AI bots.