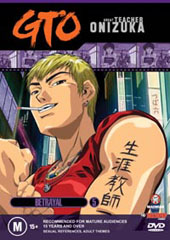 Due to COVID-19, we're unable to accept new orders at this time. Learn more...
Episode 20 - Love Letters One day, a love letter is found in Murai’s shoe box with the initial 'F' on the envelope. A female student, Kujirawaka, put the letter in his box as a favor to one of her friends. However, Fuyumi Kujirakawa’s initial is also 'F'. Kusano and Fujiyoshi think that the love letter is from Kujirakawa, but, in fact, it is from Akane Fujita, Fuyumi’s friend. Episode 21 - Revolution Everywhere Fuyutsuki, young and beautiful, is popular among male students. And, of course, female students dislike her just as intensely. One day, the girls finally kick her out of class. Losing her confidence, Fuyutsuki runs away from school. Onizuka heads toward Hakuba, Fuyutsuki’s special memorial place, taking Kikuchi, Murai, and Toroko, with him. Episode 22 - The Art of Demolition A film crew decides to blow up an old school building where Fuyutsuki and Hitomi share a lot of memories. At first Hitomi feels betrayed by a former teacher whom she trusted, but Onizuka somehow succeeds in talking her through her problems. Even so, she decides to act out and sneaks into the school building filled with explosives. Episode 23 - Superstition There is an epidemic of threatening superstitious mail at Holy Forest Academy. Onizuka himself receives a pile of cursed letters. But having no interest in any form of superstition, he burns them all. Next day, ominous incidents begin to befall him, and eventually he becomes ill.
Release date Australia
January 1st, 2007
Movie Format
DVD Region
Edition
Brand
Aspect Ratio
Language
English, Japanese
Length (Minutes)
100
Studio
Madman
Subtitles
English
Supported Audio
Genre
Original Release Year
2003
UPC
9322225010987
Product ID
1460105