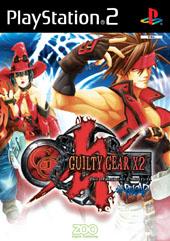 Unavailable
Sorry, this product is not currently available to order
The entire cast from the previous installment returns, along with four all new characters, each with a blistering array of special moves and all beautifully realised in some of the most critically acclaimed artwork and animation in contemporary gaming.

True to its hardcore, connoisseur roots, Guilty Gear is easy to get into, but rock-hard to master. The effort a player puts in is richly rewarded by this genre pinnacle title; one of the undisputed gaming greats of this generation.