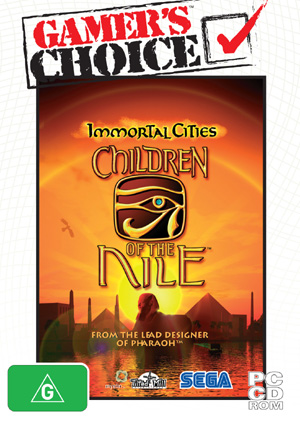 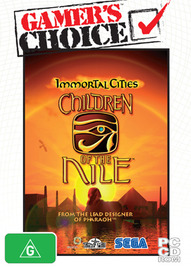 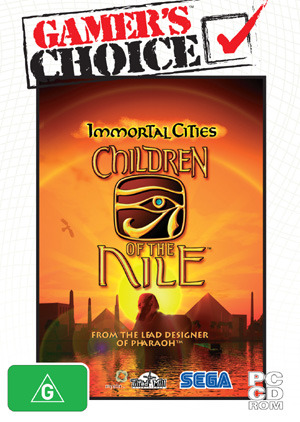 Unavailable
Sorry, this product is not currently available to order
Children of the Nile is the next generation of city-building game, where, as Pharaoh, you lead the people of ancient Egypt, uniting them as you elevate your status, striving to become a supreme and god-like ruler. You design and build glorious cities in which hundreds of seemingly real people live and work in an interconnected societal web, each facet of their lives played out in vivid detail. Eventually you will forge the most advanced civilization of the ancient world, achieve works of wonder and build a lasting and unique empire to stand for the ages with you as its personification. You'll dispatch your armies and navies to all corners of the known world, and erect monuments of splendor, including your own magnificent tomb. Come, enter your realm: the black land, Egypt. Your journey begins on the banks of the Nile, some 5,000 years ago - an idyllic setting, where simple villagers live out their uncomplicated lives, harvesting fish and waterfowl from the rich waters of the life-giving river. Their life is carefree, though primitive. That's where you come in. You can lead them to achieve so much more. As you begin to direct their efforts, hunter-gatherers become farmers (and laborers), and farmers become craftsmen. You dole out rural estates to the nobility, and soon your royal granaries fill with the grain you receive in taxes. Government craftsmen churn out piles of bricks, and now your capital city is ready to take off. With your food stores your government can support some educated workers. Your scribes help secure revenue, vital to your ongoing efforts. Overseers supervise large-scale labor operations, such as mining, quarrying, and of course the construction of massive monuments. Your priests provide social services to your citizens, tending the gods, curing the sick, educating the nobility. Military commanders forge the unskilled peasant masses into a sophisticated fighting force. Your capital city teems with activity your people begin to believe in you and your dynasty as the society you've created grows to become the most magnificent civilization of the ancient world. * First historic city building game featuring an immersive 3D graphics engine * Revolutionary interface designed for intuitive and immediate usability across all audiences * Behavioral technology based on human nature delivers a compelling experience with hours of replay value * Dynamic societal simulation where government and natural resource management are vital to the success of your civilization * Erect breathtaking monuments to commemorate your achievements and build your legacy * Explore and combat neighboring provinces or expand through diplomacy and trade * Powerful, customizable Campaign and Map Editors
Re-released on
November 25th, 2005
Game Platform
Publisher
Sega
UPC
4005209072847
Product ID
1476445