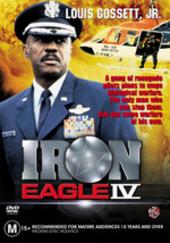 When An Evil Conspiracy Is Uncovered, Only One Man Can Prevent Mass Destruction.

A retired Air Force General recruits fighter pilot Doug Masters to teach at his flight school for teens in trouble with the law. In an emergency landing on a deserted Air Force base, the kids accidentally uncover a deranged plot to wage chemical warfare against Cuba. Can they stop the evil conspiracy before it's too late? It's up to the Iron Eagles.