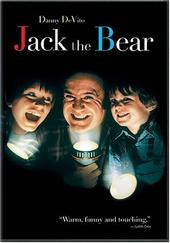 As the monster-host of a late night horror show, John (Danny DeVito) delights the neighbourhood kids with his silly ghoulish antics – but his embarrassed 12-year-old son, Jack the Bear, is not amused.

The other dysfunctional lunatics on the block – and his monster crush on the cute girl at school (Reese Witherspoon) – don’t make things any easier for Jack . But when a family crisis hits, will Jack’s dad be able to lift the grown-up burden from his young son’s shoulders?

Oscar® nominee Gary Sinise and Seinfeld’s Julia Louis-Dreyfus co-star in this funny, bittersweet look at the joys and pains of growing up.