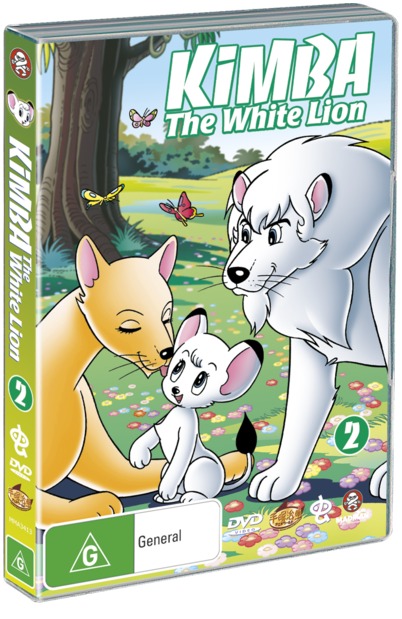 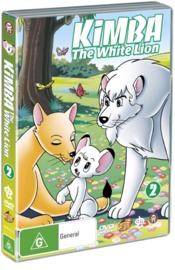 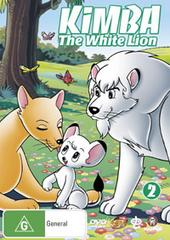 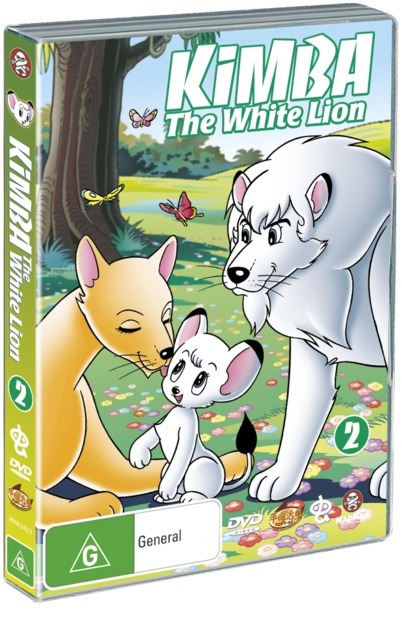 Show Hide Adult Content
Unavailable
Sorry, this product is not currently available to order
A fan favorite for years, this series is again available. Unlike today's other "children's" shows which are utterly devoid of meaning, Kimba stands alone... and it's now back to show new generations how good a show can be. Also, you might see for yourself the similarities to another big-screen picture about a lion king.


11. CATCH 'EM IF YOU CAN.
Kimba remembers one of the worst battles he ever had: the time when Tonga decided to have a hunting contest and brought to Africa three of the greatest hunters in the world. There was a brilliant scientist, a shoot-em-up cowboy, and a strong man from a circus. Each tried desperately to capture Kimba. And Tonga herself tried very hard to get that white lion.
Excitement and danger run high when the hunters' tricks are low. Kimba's stout heart, strength, and clever thinking make him a worthy catch who is never caught.
Perhaps, one day, there will be no hunter and no hunted. Kimba hopes so.

12. THE HUNTING GROUND.
One section of the Savanna in central Africa is called The Hunting Ground. Here hunters are allowed to pay a fee and hunt any of the animals. Their greed, however, has reduced the number of animals available. Tonga, the harsh mistress in charge of The Hunting Ground, decides to invade the adjoining jungle to get more animals, and especially their leader, Kimba.
Tonga sends a lion to trap a lion. The lioness she sends is Bella Donna, who proves to be as deadly as her name suggests. Kimba is caught, but Roger Ranger comes to the rescue and they manage to stop the invasion of Kimba's Kingdom. However, Roger and Kimba are nearly recaptured. They are saved by a miracle.
The miracle is that suddenly it starts to snow. Then the Magic Mystical Mountain appears, and from it comes a huge mammoth who scatters the adversaries and promises Kimba that some day they shall meet again. Kimba is left dumbfounded, but profoundly impressed.

13. THE TRAPPERS.
Viper Snakely, famed trapper, and his sidekick Tubby, masquerade as professors studying animal habits to gain the confidence of the animals and Roger Ranger. They invite the animals to a party, where all are fed sleeping potions in their soft drinks. Kimba, Dan'l Baboon, Pauley Cracker and Bucky are not at the party, and when Kimba tells them he recognizes the men as the hunters who trapped his parents, Caesar and Snowene, they encourage him to seek revenge. But Kimba has wisdom to know that revenge breeds trouble, and he resolves to work for peace in the jungle. When they find a hidden rifle and realize what has probably happened to their friends, they run to rescue the animals. Dan'l, Pauley and Bucky tire from running and Kimba must go on alone. On the way, he encounters the wily trapper, and when Kimba attacks him, Snakely's gun accidentally fires and he pretends that was a signal to harm the animals because he is in danger. The villain then jumps into his jeep and roars away, leaving Kimba thinking he has been the cause of harm to his friends.
Back at the camp, Snakely loads the animals onto trucks to take them to civilization where they can be sold. As the caravan crosses the plains, Samson and his buffaloes charge and defeat Snakely, rescuing the animals. After such a close call the animals go happily singing on their way home.

14. JOURNEY INTO TIME.
Kimba plans to attend the Lion Convention held by a neighboring tribe of spotted lions. King Specklerex, the leader of the tribe, once knew Caesar, Kimba's father, and was jealous of his wisdom and strength; so he denies that Kimba with his white fur is even a lion and banishes him from his kingdom.
Kimba is plagued with doubts about the origin of the white lion. He thinks perhaps he is a pussy cat, but his human friend, Roger Ranger, tells him the historical background of his ancestors.
Eager to be friends with the spotted lions, he offers to fight their best warrior Fang, if King Specklerex will become educated to be a good leader should he win. He wins, of course.

15. SCRAMBLED EGGS.
Kimba, who is running a school for all the young animals, decides to hold a Spring Cleaning Day so they may learn to enjoy a sense of accomplishment. All the mothers agree to put their eggs together in a safe place during the cleanup.
Little Speedy Cheetah, who has never seen an egg, throws them all into the river in his zest for cleanliness. Can Kimba save the eggs floating down the river and the children who go to look for them near dangerous wild alligators?
He can and does. But can the mothers unscramble the eggs before they hatch? No, but birds of a feather flock together at the happy conclusion.

16. DIAMONDS IN THE GRUFF.
Two nasty and mean diamond smugglers -- Norbert Nasty and Manny Mean -- are passengers aboard a plane flying over Kimba's Kingdom. When a motor burns out, the captain throws out all personal luggage in an attempt to lighten the plane's load. One such piece of luggage contains millions of dollars' in smuggled diamonds.
Meanwhile, the boss of the river's alligators -- a very rough character named Gruff -- is being very stubborn about giving back some of the younger animals. When he comes across the bag of diamonds, he eats them -- the diamonds, not the younger animals. The younger animals are all saved by Kimba and Roger Ranger in a most unusual way.
Goodness triumphs over evil and all the villains -- animal and human -- see the error of their ways.

17. THE MAGIC SERPENT.
Kimba is attempting to teach his schoolmates a lesson in tolerance. Rancid, the Reeky Bird, smells bad only because his diet consists mainly of stinkweed and he shouldn't be shunned by the other children because of it.
When Puffyadder, the "Magic Serpent", attempts to take over the jungle by casting a spell over all the animals, no one seems able to withstand his magic. Even Kimba can think of no way to rid the jungle of Puffyadder.
When Rancid tries once more to make friends in the jungle, his odor sends Puffyadder to the fresh air of another part of the jungle and Rancid's a hero. only then are the animal children ready to welcome Rancid; they've learned their lesson well that "you can't judge a book by its cover".

18. THE RUNAWAY.
Gargoyle G. Warthog is so ugly that he's sure that no one wants him around. He becomes a "runaway" even from his mother so that she’ll no longer have to look at him.
When Kimba and the other animals find him, they try to convince him that they are his friends and his mother loves him, and it's cowardly for him to run away. Wanting to show everybody that he's no coward, Gargoyle decides to take on Howler and his gang of troublemaking baboons single-handedly.
Kimba and his friends hurry after Gargoyle to help him. Together Kimba and Gargoyle rout the baboons by attacking them with a beehive. Gargoyle is reunited with his mother, assured by all that "handsome is as handsome does".

19. THE MYSTERY OF THE DESERTED VILLAGE.
Claw, the bad lion who has always wanted to rid the jungle of Kimba and be the king himself, has lured Kimba to the "deserted village" on the pretext that he wants to make up and be friends with him forever.
When Speedy Cheetah accompanies Kimba to the tryst, he finds Claw first and realizes that it's a trap. In his attempt to warn Kimba, he is hurt and is saved from a serious infection only through the help of some wealthy humans who are in Africa on a safari.
Kimba meets his sister Leona for the first time at a shrine in the "deserted village" where she's been protecting the ancestral hides ever since their father Caesar left. Kimba is able to save the shrine and his new-found human friends from the advances of Claw before he returns to his home.

20. RESTAURANT TROUBLE.
Because some animals are always fighting over food, Kimba decides -- along with Dan'l Baboon and Pauley Cracker -- that an animal restaurant would solve the problem. Dan'l is appointed manager but Pauley thinks he could do much better. Accordingly, he enlists the help of Bucky to open "Pauley’s Gourmet" to compete with "Dan'l's Diner".
There are many merry misadventures, but some of the bigger animals, like Kelly Funt and Boss Rhino, who do more than scoff at the idea -- they try to destroy the restaurant.
In the end, Kimba changes their attitudes, and Pauley and Dan'l join forces.