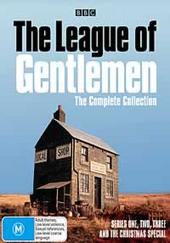 One the funniest British comedies ever created, ‘The League Of Gentlemen’ is hysterical from start to finish. Set in the bleak northern village of Royston Vasey, TLOG follows the appalling and frequently grotesque misadventures of the village's inha­bitants, all of whom are played by Mark Gatiss, Steve Pemberton and Reece Shearsmith.

Edward and Tubbs: The hideous proprietors of ‘The Local Shop’, Edward and Tubbs are husband and wife, as well as brother and sister. They're deformed, xenophobic and murderously insane.

Hilary Briss: The local butcher, Hilary is also the purveyor of ‘the special stuff’, an unidentified, highly-addictive substance with strange and occasionally fatal side-effects when ingested.

Pauline: The local Restart Officer (think WINZ case worker), Pauline is tasked with getting Royston Vasey's unemployed back to work. A foul-mouthed sadist, Pauline despises her clients and spends her days pouring scorn upon their efforts to better themselves.

Matthew Chinnery: Royston Vasey's veteri­narian, Chinnery is largely incompetent and has a disconcerting habit of unintentionally causing the violent death of any animal in his care.

Herr Lipp: German tour guide, Herr Lipp is both effeminate and creepy. He also has a habit of employing lewd sexual innuendo in a sad attempt to sleep with adolescent boys.

Papa Lazarou: Papa Lazarou is an enigma, albeit a foul and horrifying one. Master of a travelling circus, Lazarou routinely abducts women, names them Dave, imprisons them inside a circus animal and then claims “You're my wife now, Dave!”