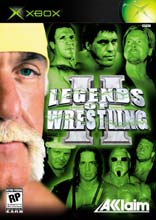 Unavailable
Sorry, this product is not currently available to order
Legends of Wrestling II is the exciting follow up to the holiday 2001 smash taking you through the ultimate wrestling hall of fame, with the top grapplers battling for squared circle supremacy!

All-new storyline career mode, allowing players to battle throughout the United States and the world for the respect of promoters and fans while fighting for the heavyweight championship of the world.

Signature entrances and taunts for each legendary wrestler, including all new licensed music composed by "Mouth of the South" Jimmy Hart.

Leverage the experience of some of the greatest managers in the business, including Bobby "The Brain" Heenan, The Grand Wizard, Captain Lou Albano, "Mouth of the South" Jimmy Hart and Mr. Fuji.

Never before seen DVD bonus footage, including interviews with many of the legends talking about their famed careers, favorite opponents and more.

All-new dynamic cloth and hair technology enhancing the realism of the wrestlers' movements.