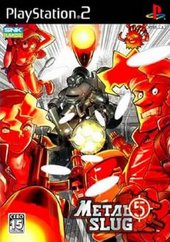 Unavailable
Sorry, this product is not currently available to order
A research installation developing the next-generation of Metal Slugs is attached by unknown forces and a disc containing Metal Slug secrets has been stolen. Lead Marco, Tarma, Eri and Fio into "The Corridor of Fire" to recover the secrets and destroy the paramilitary syndicate known as the Ptolemaic Army.