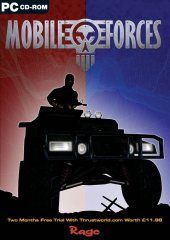 Eight different game types, including Safe Cracker where you must infiltrate the enemy base, blow open the safe and steal the gold bars. And a trailer-capture game where you have to push the vehicle physics to the limit to beat the opposition to an explosives trailer, hook it up to your own vehicle and tow it to a detonation point.

Nine weapons, each with alternative firing mechanisms - ie with the shotgun, either barrel can be fired individually, or both at once. Machine gun can be fired quickly in normal mode, or "accurate aim" mode can be switched to for more precise aiming - but slower reload speed. Laser Trip Bombs can either be thrown to activate them as proximity mines, or attached to walls/doors/vehicles as strategic traps.

Players choose how many weapons they want to arm themselves with - but being armed to the teeth weighs you down, so some players choose to only take a pistol and get a substantial speed advantage. Essentially, it is a class system (Ref: Half Life), but one where players can change "class" mid-game rather than being stuck with a character until you die.

Vehicles. At the moment four different vehicles, but we are hoping to have the time to add quite a few more. Players can choose either to drive a vehicle, in which case it is a good idea to have some bots (or other players in multiplayer) jump in the back seats and blast away at any opponents you happen to whiz past. Or they can jump in the back of a humvee a bot/other player is controlling, and do the blasting themselves.

The Vehicle physics is very impressive - being programmed by the guy that did the physics for Grand Theft Auto 3 and Wild Metal Country whilst at DMA. Vehicle suspension, gears, brakes etc has all been properly modelled. Vehicles are not just "boxes that move" - shooting out the tyres makes a vehicle more difficult to control, crack shots try to snipe the vehicles petrol cap - resulting in one almighty explosion!

The game is built on top of Epics Unreal Tournament and forthcoming Unreal Warfare technology - graphics hardware is pushed to the limit by the use of static meshes, poly counts go through the roof with smooth rolling terrain.

Gameplay structure has been geared to creating fun replayable levels (think Tony Hawk, not Quake) that will have people replaying over and over just for the surprise of never knowing when the AI will get an opponent to drive a truck right into your base, with four others jumping out the back!