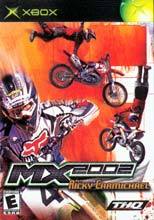 Due to COVID-19, we're unable to accept new orders at this time. Learn more...
The biggest extreme sport just got bigger! Prepare for new levels of immersion, authenticity and compelling gameplay with MX 2002 featuring Ricky Carmichael for the Xbox. Ride like a champion, compete for rockstar status or just cruise the open terrain for your moto kicks.

Robust, addictive freestyle mode including the Bus Jump and Step Up Challenges.

Tight, responsive controls to pull huge wheelies, stoppies, tail whips and more - everything but the arm-pump!

6 different multi-player modes including Stunt Showdown, Challenge Race and the Step Up Challenge.

Create-A-Rider feature with all the big name-brand sponsors to choose from!