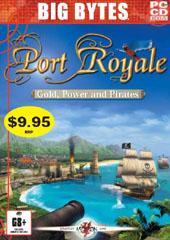 Unavailable
Sorry, this product is not currently available to order
Port Royale presents a dynamically open ended world, featuring a unique style which is totally unscripted. Graphically superior, featuring intricate detail with amazing water effects, ship damage and naturally moving wildlife. You will witness some of the most stunning scenary ever seen within a game of the genre. Specifically re-designed, AI places the gamer in the heart of the trading battle. The gamer plays within one map, exploring 60 different towns all with their own ports. Discover the secret pirate and player hideouts as you battle with up to 12 ships in 3D sea battles. You have the freedom to trade in each town, each with over 100 dedicated missions. The computer will randomly generate new missions, giving you thousands of possible outcomes, displaying expansive gameplay.